I imported a sphere from Wings 3d and I apply the hologram simple to it and it works! I even changed some some of the nodes and that worked. I then replace the shader with the forceShield shader and this has the undulating shape, the lighted rim but the pattern of the hexagrid seems to be huge as I only see the center color of a grid cell and not the whole pattern as shown in the Shield Main Pattern group.
I am not sure what to do. My focus seems to be on this group though and some of the nodes in that group.
If I can get this to work my knowledge would increase a thousand fold.
I come from the background of 3d modeling. Yesterday I had an epiphany of simply creating simple models and switching my detail over to shaders. My mind exploded with advances. I can add way more detail in the unity models with less work!

The video capture didn't get the motion but the middle sphere flickers on and off as one big dot of color. I can never seem to get the pattern on the object in a number of different tests I have done. I followed the demo on the
https://www.youtube.com/watch?v=anB5WbjLeYU @ 10seconds. In the ASE the textures move and I can see the patterns but not on the gameobjects.
I would love to solve this problem but don't know where to look. I can not find where this has been addressed.
Otherwise this is a fine product that takes some development effort to get the effects one might want. The easiest way is to start out just copying what you find.

Management sees this demo, buys package, throws it on my desk and states 'Make some magic'.
This prince has turned into a frog.

Another day thrashing through an interface.
This is getting exhaustive.

If it is me or my ignorance I will delete this post and video when I get a solution to this problem and review ASE in the asset store.
I am sure hoping it does not need FBXs to work. Like I posted. I have an imported object from Wings3d that works with the Hologram simple shared material.

Hello, first of all let me apologize for the delay in our response, we've been quite overloaded which has delayed our usual response times but we always do our best to get in touch with every post, pm and email, even if it takes a bit longer sometimes.

Regarding the issues you're having, I'll do my best to approach them on a case-by-case basis:

In the first video you've shared, I've noticed that you're editing your shader in Shader Mode rather than Material Mode, due to the green canvas border. You should edit in Material Mode so that you can see your changes in the scene, as editing in Shader Mode will only change the default values for the shader.

In the second video, I'll split my feedback according to different timelines:

1:26 - The MultiPassDistortion sample has an issue with its template reacting to the skybox, we appreciate that you brought this to our attention! We've just corrected this in the latest build. As soon as you update ASE it should work as expected.

1:51 - The Wings3D mesh you're using might have an issue with its UVs, we'd have to examine a sample on our side to be sure so please send us a sample mesh and we'll be happy to look into it for you.

3:43 - The Iridescent shader is part of the samples for Unity's HD RP pipeline, so it won't work unless your project is using the HD RP and ASE has been set up accordingly. Shaders for the LW and HD pipelines are not compatible with the Core / Standard pipeline, which is a Unity limitation, and we've been addressing any related issues on our forums ever since Unity introduced these pipelines.

10:31 - The Melting template has its parameters tweaked specifically for the mesh we're using, which are exposed through the material inspector. You'll need to adjust these in order for them to work in different objects, which is expected.

On a final note, we understand that it can be frustrating to learn a new interface, especially if you have little or no experience into visual node based editors, but we believe that ASE is user-friendly and provides a clean interface and a flexible way to quickly create shaders. The development has been community driven and we focus on supporting all of Unity's latest features, such as the new Scriptable Rendering Pipeline.

Despite the above, shaders are a "special case", and even though you don't need to be an expert shader programmer, there are some concepts that you will need to learn in order to build shaders with an editor such as ours, or any other. We encourage users to look elsewhere for shader specific learning resources, as there's a lot of information out there than can be applied here.

I also recommend that you take a look at our manual and Official - Basics videos, as they touch upon very important concepts and features of our node-based shader editor.

Even with limited resources and a small team, we've produced several tutorials and introductory videos that should help you get started, together with a wiki page full of useful information, a node list that is frequently updated and over 60 free samples that you can use on your projects or to learn more about the intricacies of node based shader authoring, and we're always available for any direct inquiries, for which we recommend using our support@amplify.pt email as it provides the fastest response time.

That being said, your feedback is extremely important to us, if there's anything in specific that you would like to point out as incorrect or misleading, we would really appreciate it as we're always on the lookout for possible improvements.

Wings 3d .obj sphere not allowed as upload in forum

For a faster resolve, I would recommend also sharing your shader if you made any changes. I also noticed that the shared obj has simple planar UV, this will not give you the same results as the Unity sphere. Also note that model format support is beyond the scope of our editor, we use only what Unity provides.

Just to add what my colleague shared above, it's important to note that shaders are always dependent on how and where you use them; while some effects are reusable out-of-the-box, others will absolutely require some standard tweaking.

I hope we can assist you in creating the effect you're looking for.

Thank you for your response.
Here is the test package with everything.
https://www.dropbox.com/s/r7u6hha1xpdqsf8/ASE-Test.unitypackage?dl=0

There are two spheres in lower row with the gunfield shader, left is obj right is unity GO.
The upper row of spheres has a wings obj in the left side. The community hologramSimple works on it.
In the ASE I could not see a difference that I could make to the gunfield shader to cause it to perform.

The main question would be then is what is the difference between the hologramsimple and my gunfield that is not apparent in the ASE?

I've tested the sample and concluded that there is an issue with your mesh and its UVs, as even Unity's default Standard Shader with only a texture set to its Albedo produces the following result: 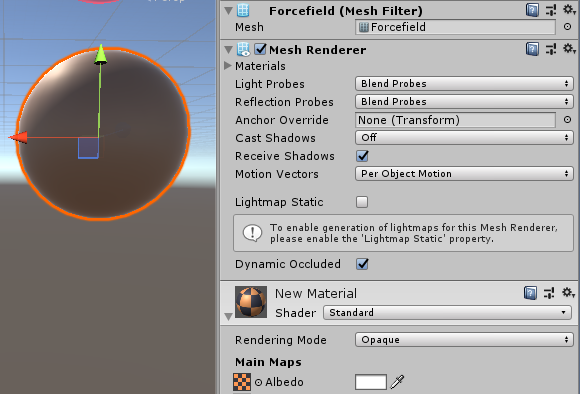 The Hologram Simple shader does work on your object as the effect it produces does not depend on the mesh's UVs to display correctly, and any other shader where the UVs don't play a noticeable role or any at all, such as the ScreenSpaceCurvature for example, will also display properly on your mesh.

In short, there's no issue on ASE's side.

Thank you.
This points me in the correct direction to further my knowledge.
Looks like I have some further investigation to do into the over all shader environment.
These answers have spurred more thoughts about the current state of my wings *.OBJs importing.
I will post any further advances here for future reference.

Glad we were able to help!

Please don't hesitate to get back in touch if you come across any further questions or issues, we'll be happy to assist.
Customer Relations at Amplify Creations
Learn more about our offering: Amplify Creations Products
Amplify Shader Editor won the Asset Store Best Tool Award - Thank you for your support!

Users browsing this forum: No registered users and 2 guests