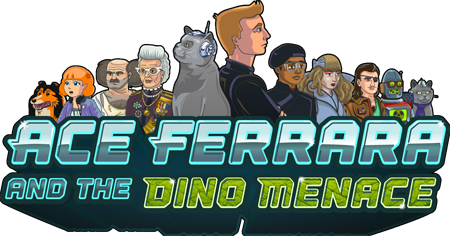 Ace Ferrara And The Dino Menace is a space combat simulation game featuring mystery, romance, cat-augmentation, space-faring dinosaurs and a heartfelt appreciation for 80s sci-fi cartoons. Developed by Philipp Seifried, the game will launch on iOS in early 2014, with releases on other platforms (Android, PC, Mac) planned later in the year.

An awesome looking game, amplified by our color grading technology and developed entirely by one person, Philip did all the code, graphics, music/sfx, writing, cat-petting and PR. We also suspect he taught dinosaurs how to pilot spaceships and for one we welcome our new reptilian overlords.

Ace Ferrara plowed through the Academy with a single goal: to become a member of the Proton Riders, an elite force of galactic protectors, led by the enigmatic Double-Doctor Proton. However, as an internship brings him aboard the Proton Riders’ flagship, Ace finds out that working with his heroes is not quite what he dreamed it would be.

Get it 50% off at the Asset Store Madness
Only a few more days to go!

Ace Ferrara And The Dino Menace